The Millennial Takeover: How the Generation is Shaking up the Workplace 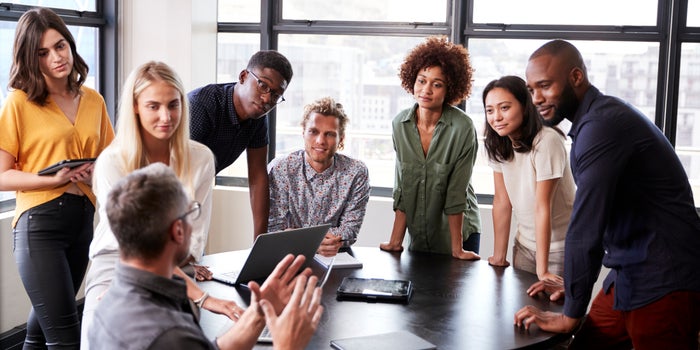 By 2025, more Millennials than Boomers will be in leadership positions across all industries. Here’s how ‘the kids’ will aim to instill change.

In the next five years, the U.S. workplace is poised to experience a changing of the guard.

The majority of Baby Boomers, now in their upper 50s, 60s, and lower 70s, will be well into retirement age. Their vacated executive positions and managerial roles will most likely be filled by up-and-coming Gen Xers and Millennials, if they haven’t already.

Currently the largest living generation in the U.S., by 2025 Millennials will account for 75 percent of the American workforce. While their habits as consumers often get maligned in the media for bringing about decline in industries and products as wide-ranging as napkins, cable TV, soda, razors, golf, mayonnaise, traditional weddings, department stores, starter homes, and “breastaurants,” what they bring to the table—rather than take off it—deserves more of the limelight.

Love them or hate them, here are major cultural shifts you can expect to see in the workplace as more Millennials take charge.

While the jury is still out on whether Millennials are more or less brand loyal than preceding generations (some studies say they are, some say they aren’t, and some say it depends on the product category), one thing is for certain: Millennials value brands that demonstrate authenticity, and that authenticity is shown by remaining true to a cause.

This is the case for both patronage and workplace preference. Millennials want to buy from and work for businesses that have a purpose at their core. A job is no longer just about a paycheck and putting food on the family table; for Millennials, it’s very much about purpose, with 75 percent saying they want their personal values to align with their company’s values and are even willing to take a pay cut to work for a value-aligned company.

Co-authors John Izzo and Jeff Vanderweilen call it the forthcoming “Purpose Revolution.” Employees, customers and investors are increasingly looking beyond a company’s bottom line to ask how it’s making the world a better place. In the age of social good, the line between for-profit and not-for-profit becomes less rigid, and brands like TOMS, Ben & Jerry’s, Patagonia and Warby Parker are all lead actors, as they put their social corporate responsibility front and center, a scorecard against which the world can judge their success. Expect Millennials to continue wearing their social causes on their sleeves as they move up the ranks and have a greater say in shaping their own company’s mission.

Another area in which you can expect to see Millennials making change is in leadership style. Fading are the days of the corporate strongman, whose word becomes instant workplace policy, and whose authority is derived solely by title or position.

It could be the result of growing up in a postmodern era, but many Millennials are very aware, and skeptical, of power dynamics, and tend to see legitimate authority as earned rather than assumed. Consequently, Millennials respond better to leaders who inspire by example and embody the mission of the company. A big part of authentic leadership is the willingness to solicit feedback and hear out ideas, not just from one’s own C-suite peers, but from all levels of an organization.

That ability to understand and share the feelings of others is what we call empathy, and it’s a huge component of emotional intelligence. Empathy is especially important for leaders, as they need to understand what truly motivates their team in order to build a successful, thriving culture on that foundation. Moreover, empathy is especially important today, as Daniel Goleman writes in Harvard Business Review, for three main reasons:

As they step into leadership roles, expect Millennials to perform like the kind of leaders they most respect—the charismatic, caring, and listening kind.

Ever noticed how suits, once a staple of corporate America (Mad Men, anyone?), are slowly losing their prominence among the office dress code?

You could blame it on Silicon Valley. Tech execs like Steve Jobs, Jack Dorsey, and Mark Zuckerberg have for years  evinced a dressed-down style that’s more Tony Hawk than Tom Ford. The trend is so prevalent that Vox declared suits are now mostly reserved for “powerful men when they’re in trouble” (aka Zuckerberg at a Congressional hearing).

But the waning popularity of suits is symptomatic of something bigger than just workplace fashion trends. It’s about corporate structure. Along with open offices, corporate town halls, employee stock ownership, and rotating team leaders, casual attire is part of a larger Millennial-driven trend toward a flattened hierarchy in the workplace.

Sometimes described as a “flat organization” or a “holacracy,” a flattened hierarchy reduces bureaucracy overall and aims to eliminate the mid-management levels between executives and entry-level employees. Shrinking that gap has a number of advantages. Besides reducing unnecessary labor costs, it stresses individual responsibility and encourages each team member’s personal investment in the company; facilitates a freer flow of communication; allows for quicker, more nimble decision-making; and empowers team members to be proactive in leading and offering solutions rather than placing that burden entirely on the shoulders of the CEO.

And a flattened hierarchy is more in line with the type of leadership Millennials most resonate with—the kind that’s on their level rather than in some aloof, top-floor corner office.

At home with disruption

Born between 1981 and 1996, Millennials have grown up witnessing tremendous technological change, from the introduction of computers in the home, to dial-up internet, the dot-com boom, broadband, nearly ubiquitous Wi-Fi, the Internet of Things, cloud computing, self-driving vehicles, smartphones, smart houses, smart everything.

Nobody knows more experientially than Millennials the evidence for Moore’s Law—that computer chip-based technology seems to double every one-and-a-half to two years. Needless to say, for them, disruption has become cliché, a buzzword that’s lost its buzz.

While “digital natives” may gloss over the fact that Millennials come from diverse upbringings with unequal access to technology, the gist remains: as a generation accustomed to constant software updates and the breakneck pace of change, Millennials understand that successful businesses need to be ready to adapt or die.

Consider Apple’s goal to roll out a new iPhone every year and Facebook’s frequent overhauls. The generation that’s brought us Airbnb, Lyft, Groupon, Spotify, Tinder, Oculus RV, Stripe and nearly every social media platform imaginable will make it a key operational philosophy for the companies under their watch to remain relevant or risk fading into obscurity.

That same saturation with communication technologies that earns Millennials the label of digital natives has also taught them how hard it can be to “turn off.” When your mobile phone is your work phone and an office email can appear on your smartwatch at any time, the traditional nine-to-five schedule can take on the dreamlike aura of a bygone time in which it was once possible to keep work life enjoyably distinct from personal life.

In reaction, many Millennials have pushed back against the “always-on” expectations at their jobs and advocated for better work/life balance in their careers, which makes sense. Burn out is real, and it’s no secret that happier people are more productive employees, and more likely to stick around.

The irony is that the very technologies that make us accessible around the clock and thus the potential victim of 24/7 work demands are the same technologies that can deliver better work/life balance. For many skill-based creative professions, digital technologies allow for flexible work hours, telecommuting, location independence and a number of other benefits that boost individual control over one’s own work life.

As we reach a generational tipping point that sees more Millennials in leadership positions, expect them to introduce more workplace policies that contribute to employee happiness, particularly ones that increase self-autonomy and protect work/life balance.